General Erich Ludendorff, Imperial Germany’s principal military strategist, described August 8, 1918, as “the Black Day of the German Army”. On that day, Allied forces, in the form of the Australian Corps under General John Monash and the Canadian Corps under General Arthur Currie, delivered devastating blows on the Western Front.

It was the fifth year of the Great War and the German army, which in the previous year had knocked Russia out in the East, now began to crack. The Germans had gone close to winning the war. In 1917, their submarines had brought great peril to trans-Atlantic convoys, but unrestricted submarine warfare inevitably brought the US into the conflict.

In March 1918, the German army tried to knock the allies out on the Western Front before American divisions could arrive in strength.

As Peter Brune observes in his conclusive new history, Our Great Hearted Men: “Time was the key.” He continues, “By March 1918, using his divisions arriving from the Eastern Front, [Ludendorff] anticipated that he could deploy 192 divisions to the Allies’ 173 on the Western Front. Any German offensive in 1918 would therefore have to be delivered in the Spring, before the American build-up of troops would eventually overpower his army.’’

The soldiers of the Australian Corps had distinguished themselves in battle many times over, especially in blunting the German offensive at Villers-Bretonneux, on Anzac Day 1918 and, then in a magnificently executed attack, with American forces, at Hamel on Independence Day, 1918.

Brune has built an impressive reputation as a military historian with outstanding contributions such as A Bastard of a Place, on the war in Papua, and The Spell Broken: Exploding the Myth of Japanese Invincibility.

His We Band of Brothers distils the Australian military wartime experience to small unit dilemmas and encounters. He is a chronicler of the first rank.

Monash was one of the outstanding figures of the allied triumphs in late 1918. Perhaps he claimed too much credit in his conversations with Keith Murdoch, but there is no doubt that his ability to weave the arms of battle: infantry, artillery, tanks, logistics and air support, together had few equals.

Monash trusted the Canadians on his right flank implicitly and his judgement was vindicated. His planning was meticulous and his briefings to his subordinates meant the Australian Corps understood thoroughly what its objectives were.

Monash embraced the new technologies of battle. This was not true of everyone in the British Expeditionary Force, even as the battlefield opened up. Brune notes acidly:

Old habits die hard. With a prospect of a return to mobile warfare, Field Marshall Haig was determined to ensure that his horsed cavalry was returned to its traditional place of eminence on the battlefield. His fixation with cavalry was to damn him before the remainder of his life. He remained blinkered to the fact that with the concept of the ‘‘nation in arms and industrialisation of war’’, the shock action of charging cavalry and their mobility was no longer effective …

The performance of the Australian Corps under Monash remains one of heroic accomplishment on the nation’s military canon. The Australians overcame determined German resistance, at times to the point of exhaustion, verging on mutiny, to make an astonishing contribution to Allied victory.

They set a benchmark for future generations of Australian men and women in the field. This benchmark meant the soldiers of the Second AIF often asked themselves the question: were they performing as well as those of the First?

The answer is to be found on the battlefields of World War II — from Bardia to Buna, from the Muar River to Milne Bay, from Tobruk to Tarakan — but Australian military hopes and fears intersected at Kokoda in July 1942.

This is the subject of David Cameron’s The Battles for Kokoda Plateau. Cameron is a noteworthy military historian, but he has no hesitation in acknowledging his debt to Brune’s analysis of the war in Papua New Guinea, including his book Those Ragged Bloody Heroes.

Cameron traces the conflict on the Kokoda track in forensic detail. This is history at the levels of section and platoon as the Australian Militia of the lightly equipped and undertrained 39th Battalion, supported by the First Papuan Infantry Battalion, confronted the Japanese moving inland on the track, after landing at Buna.

Cameron is graphic in his writing, from hand-to-hand fighting to the atrocities committed by the Japanese against Australian and American airmen and soldiers and, even more disturbing, against local civilians and Anglican missionaries. Rape and murder, often in the form of beheadings, were watch words of the invaders’ brutality.

Strategically, the struggle at Kokoda, in defense of Port Moresby, cannot be separated from either the American invasion of Guadalcanal or the Australian/American Battle of Milne Bay.

Cameron recognises this. “The Japanese High Command quickly realised the Papua and Solomon campaigns were essentially’’ — and here he quotes historian Eric Bergerlud — ‘‘two parts of a whole – they were the two fronts of the same remarkable campaign that, in the truest sense of the word, turned the tide of the Pacific War.’’

Fighting in PNG involves not only the combatants but the terrain: the elements and disease.

The Australians were fortunate to have hundreds of native carriers, often impressed into service, but invaluable in supply and evacuation. There were also collaborators who were dealt with harshly when captured.

“In September 1943,’’ Cameron writes, “a total of 22 Papuans were arrested and found guilty of betraying local civilians, and Anglican missionaries, soldiers and airman to the Japanese, resulting in their murder and execution.

All were sentenced to death.” This was a war that seldom gave quarter.

But there were examples of mercy. Heroism appears in different uniforms and in diverse guises. Jan McLeod, an academic at the University of Newcastle, with strong family ties to the Australian Army Medical Corps, puts this beyond doubt.

Shadows on the Track: Australia’s Medical War in Papua, 1942-1943, offers a unique perspective as McLeod traces the Australian medical effort to treat and evacuate Australian and US casualties from Papuan battlefields.

She succeeds admirably in emphasising the courage and compassion of allied medical personnel in adversity: under fire and in primitive circumstances while battling diseases such as malaria. Many lives were saved; many of the dying were made more comfortable in their last hours.

These three military histories deal with campaigns in which Australians played critical roles. The struggles were fierce and the outcome by no means guaranteed.

The capacity of Australians to work with allies, overcome serious odds and support each other is a recurring reality on battlefields as distant as Western Europe and the South Pacific. 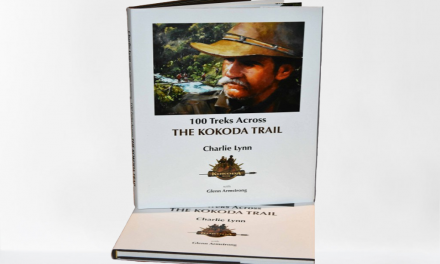