We were saddened to learn today (30 December 2013) of Sergeant Ben Moide’s passing in Port Moresby.

However we will be eternally grateful that Ben’s heroic story has been captured by Mr Lahui Ako in his book ‘Nameless Warriors’ published by the University of Papua New Guinea Press and Bookshop in 2012. Lahui Ako wrote of his race against time to complete the book. He was aware ‘that God could call the old man to rest at any time while I laboured on. So in between writing, prayers went up to the Almighty to allow the old man to live longer in order to personally witness the completion of this project.’

We can only thank God his prayers were answered because Ben Moide’s story is a vital contribution to our understanding of the complexities of the war from a Papuan viewpoint. This aspect has been neglected by recent authors and publishers on the Kokoda campaign because of their own lack of empathy with PNG. Lahui Ako discovered this when he was advised by a potential Australian publisher that Ben Moide’s version of the Kokoda campaign ‘was not recognised in Australia’.

This should have been no surprise because the Australian commentariat still cannot bring themselves to acknowledge that ‘Kokoda Trail’ is the official name of the Battle Honour awarded to Ben Moide’s Papuan Infantry Battalion (PIB) and to the 10 Australian battalions who fought in the Kokoda campaign. Nor can they accept that the original mail route between Owers Corner and Kokoda was gazetted ‘Kokoda Trail’ by Chief Minister Michael Somare in 1972.

Any mention of Ben Moide’s passing in the Australian media will use the politically correct term, ‘Kokoda Track’, in any reference to his active service.

According to Lhui Ako ‘the Papuan Infantry Battalion acted as the eyes and ears of the Australian digger, leading him into the unknown; mostly into places where  he himself, in peacetime, wouldn’t have dared to tread, because of tribal animosities and the traditional beliefs of the dark arts.’

He then gives a strong hint of the complexities faced by young Papuans when he described Ben Moide as ‘an eighteen year old Sergeant of mixed Motuan and Kiwai parentage, not initiated yet in tribal lore, born and bred away from the birthplace  of my father where the warrior culture was still brimming with life to do to being passed over by the missionaries – to be given the responsibility of leading grown men; men who had faced tribal enemies and killed and smeared their enemy’s blood all over their faces to justify a kill; men of another tribe.’

‘Ben Moide, being a teenage NCO (Non-Commissioned Officer) and the only Kiwai NCO at that, until the PIB C Coy (Charlie Company) was raised made up predominately of men from the Kiwai areas would have surely raised and caused uneasiness and great jealousy among older Gulf NCOs as to why a kid of mixed Kiwai and Motuan parentage who could speak the taubada’s (white man’s) language well, brought up not in his father’s tribe but in his mother’s tribe, and one so young at that who had not even been initiated into the world of the man – was now deemed initiated by the taubadas to lead men to war. To the older NCOs this was an outrage and cause for disrespect to their tradition and the memories of their forefathers. Even with C Coy, he was regarded with suspicion because of his heritage. As such, his life was constantly in danger from all angles throughout the war’.

‘The PIB, formed purposely for reconnaissance, combat and guerrilla operations, fought because the taubadas told them to. However the fact remains, this was an outsider’s war and would be recorded as thus, a war fought by Australians for the Australian motherland.’

Seventy-one years on the Australian Government still has not grasped this essential point.

‘For most Papuans, the events which unfolded between 1942 and 1945 marked a turning point in the history of their interactions with the colonial ‘master’. For some, the war represented opportunities for pay-back killing, while for others it provided opportunities for improved status and new ideas and skills which could be used to challenge the authority of the master. In many areas, where warrior status had been laid to rest by the missionaries, taking up weapons again to fight, albeit in the taubada’s war, greatly enhanced one’s status and permanently changed one’s view of the outside world.

‘For the Papuans, there was no concept of ‘nation’ as understood by the taubada’s. The Papuans were tribally oriented and horizons merely extended to the top of the nearest mountain. Loyalty was to a bloodline (extended family), and even within this extended family structure, there were deadly enemies. The arrival of the war gave traditional enemies the opportunity to get at each other’s throats again, but this time, with the full blessing of the warmongers.’

In his interview with the author, Ben Moide, said:

‘We fought, but to the bulk of the taubadas we remained nameless; we were just the native scout or the Papuan guide to them. Still, to the gallant few who addressed us by name I owe them my undying gratitude for treating us as mates. But the fact remains, without the help of all those nameless warriors and carriers who braved the sickness, rain, mud, hunger, despair and enemy of this campaign, all would have been lost.’

According to the author of war history of the Papuan Infantry Battalion, G.M.Byrnes, documents captured at Gona in the Northern District of Papua revealed that the Japanese referred to the PIB as Ryokuin (Green Shadows). ‘The few Japanese prisoners interrogated said they were warned against armed Papuans and respected them for their ability to fade into and then reappear from the jungle as if they were shadows.’

Ben Moide fired the machine gun burst into an ambush position against the advancing Japanese soldiers at Awala on 23 July 1942. It was a historic action that is now commemorated as Remembrance Day in Papua New Guinea.

After the war Ben raised a family and was engaged as a driver for Governor Sir Hubert Murray. He was a keen rugby player and later worked with the San Miguel and SP brewery before retiring in 1991.

In later years Sergeant Ben Moide emerged as the symbol of service and sacrifice of the PIB. He was revered by all who knew him. arlier this year Jason Daniels, of the Australian War Graves Unit in Port Moresby, was present at an interview with Ben. He wrote:

‘In a moment of peace, away from the lights and cameras, I asked Ben the same questions and got a whole world of personal stories from the old Papuan from Pari Village. I asked him about his CBE, his Commander of the most excellent Order of the British Empire…

‘He said he travelled to London so the Queen could tap him on the shoulder and say thank you. He said the Queen and Ben were now good friends and if I was ever to meet the Queen, I should mention Ben’s name.’

Former NSW Premier and Foreign Affairs Minister, Bob Carr, once wrote: ‘the Men of Kokoda are among the greatest of heroes in a land that rightly canonizes few heroes. And as time slowly steals the survivors from our midst, it’s hard to resist thinking that Australians in the not too distant future will look back with almost disbelief at the giants who lived in those days.’

Sergeant Ben Moide CBE is one such giant of his era. He will be sadly missed. Sergeant Ben Moide CBE with the presiding Chaplain of the PNGDF

PNG Guard of Honour at the Remembrance Day Service Dawn at the 2008 Remembrance Day Service in Port Moresby 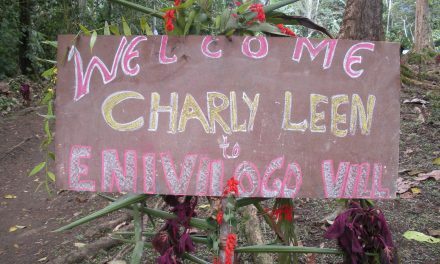 Case for a Visitor’s Centre at Owers Corner