WHAT do you get when you combine the historic Kokoda Track with a bunch of celebrities?  The answer, judging from Nine’s A Current Affair, is a disaster, of significant proportions, with the odd triumph thrown in.

When the bedraggled trekkers gratefully finish the 100km nine-day trek in Papua New Guinea they have, between them, battled enough injuries – mental and physical – to keep a flying doctor in business for a month.

On the Kokoda an exhausted Angry Anderson becomes a mere pussy cat – reduced to tears in the consoling arms of former army major Charlie Lynn, who led the team’s Kokoda assault.

Even producer Philip Kemp has to be stretchered home on the final leg of ACA’s Kokoda Challenge, in which personalities such as former iron man Grant Kenny, actor Collette Mann, musician Daryl Braithwaite and Aussie rules legend Dermott Brereton retrace the steps of our Diggers to mark the end of war 51 years ago.

Heatstroke, sprained ankles, twisted knees, infections and mental doubts reduce this modern-day Kokoda Team to a rag-tag outfit that would have been a pushover for any enemy lurking around the next tree.

But, in contrast to our World War 11 heroes, that threat wasn’t a reality, and this group didn’t have to carry weapons, ammunition and wounded colleagues in addition to backpacks loaded with provisions.

Lynn gave advice on fitness in the weeks before the trek, but says it’s one of those things you can describe to someone, but until you’ve experienced it you can’t mentally prepare.

The mud, slush, humidity and sounds and mysteries of the jungle combine to form a daunting concoction that’s a shock to the system, at least for a couple of days.

He believes that, perhaps – “it’s not a criticism” – celebrities are used to being looked after and when something goes wrong there’s always someone on hand to step in and fix it.  “On Kokoda you’ve got to fix it yourself.”

There were other dramas outside the group.  At one village Dr Kerryn Phelps, who is kept busy with the walking, and non-wlaking, wounded, discovers a woman and baby suffering from viral pneumonia.  A passing plane is radiod to take them to hospital, almost certainly saving their lives.

Braithwaite, whose father served in PNG during the war, wanted to experience something of what he had to endure.  It was, he says, the toughest test he has faced.  “I was determined to make it, no matter what.  But it was really, really hard.”

For him the worst part was continually making camp after dark – often not until midnight and, on the first day, at 3am after 22 hours on the move.  (“It was because they were so slow,” says Lynn).

Braithwaite says that sharing an experience that will stay with them for the rest of their lives had a strong bonding effect on the group.  He now understands the annual Anzac reunions.  “I used to look at them on TV and think: ‘why do they do it?’”

Were the groups’ agonies put on, or at least exaggerated for the cameras?  “You don’t have to stage anything over there,” says Lynn.  “The first time I did it I regarded it as the toughest think I’d done and I’d competed in iron man triathalons and 24-hour ultra marathons.  Nothing prepared me for Kokoda and nothing could compare with it.”

Most people attempting the trek initially undergo a massive period of self-doubt, he says.  “I inow they’re going to make it, but I can’t convince them at that stage.  They have to work that our for themselves.

“But, as they come out of it and conquer it, their confidence is enhanced tremendously.”

Lynn has even turned the Kokoda into a corporate leadership program.  Participants face a tougher test that the one faced by the A Current Affair personalities, tackling additional tasks such as bridge-building and constructing stretchers to carry “injured” colleagues.

Lynn claims that in most corporate training, “people can bullshit their way through, but on Kokoda you can’t hide.  Once you’re committed, you’re committed.”  The historical significance gives it that much more power.

He started organising the treks in 1992, when he realised people didn’t know much about Kokoda’s history – “and, of more concern to me, they didn’t seem to care”.

He decided the only way he could make people appreciate its significance was to take them over to experience it.

Lynn, a walking history on Kokoda, gives his charges a lesson on the significance of areas on the way.  At Isurava – “Australia’s Alamo” – 50 young Australian’s without food and low on ammunition, held off the Japanese for two days.  They were all that stood between them and Port Moresby. 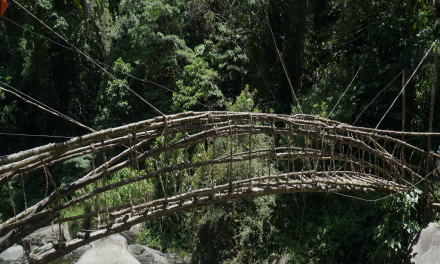 Kokoda: A bridge too far!

BOOK LAUNCH: The Battle for Australia by Bob Wurth

Is this the World’s meanest tour guide?

GEO australiasia: To Hell and Back