Taking a knee for Australia! 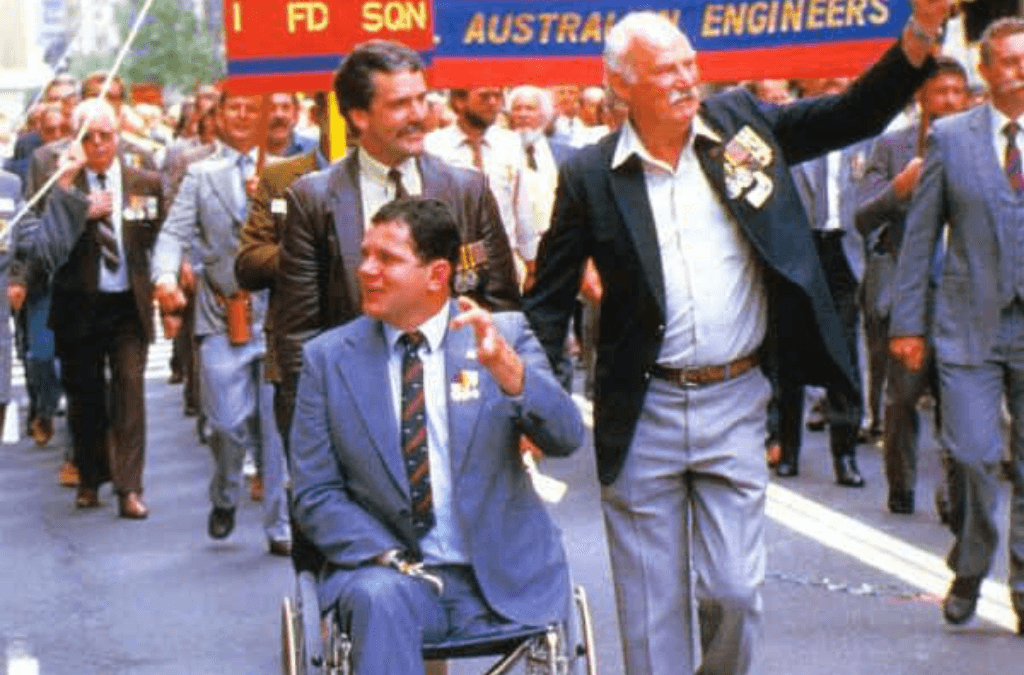 January 1967, John ‘Jethro’ Thompson is a 21-year-old Aussie Digger on his way to the war in South Vietnam. Five months later he returns home – doctors don’t expect him to survive his horrendous wounds – 20 years later he joins his Vietnam mates, Charlie Lynn and Brett Nolan, in the ‘Vietnam Welcome Home Parade’ in Sydney.

Nobody knows what happened that day.  Jethro was arming land-mines when they were hit.  An explosion lifted him in the air and threw him onto his back.  His mates in the squad were blasted but Jethro took the full brunt of the deadly mix of explosive powder and jagged shrapnel.

As I raced to the helipad the bloodied bodies had just arrived and were carried by desperate medics into the field hospital.  Surgical teams went into immediate action and six hours later Jethro, his body swathed in bloody bandages, was wheeled into the ward.  Stumps stuck out where his arms used to be.  Another stump where his leg used to be.  Huge clamps held his stomach together.  Shrapnel fragments peppered his face.

Within a couple of days two sappers in the squad died of their wounds.  Jethro defied the odds – his subconscious mind was already planning what he was going to do when he got better – not if.  He has no conscious memory of his first 40 days in that ward full of young limbless soldiers.  I recall many conversations with him – all of them positive.

During my vigil at his bedside I received news that one of my five brothers had been killed in a car accident at home.  It took two weeks to find out which one.  A far cry from the ‘embedded’ communications we have in army units today.

Six months later Jethro was a patient at Heidelberg Repat Hospital – I was a student at the Officer Cadet School, Portsea.  It was a dramatic upgrade for both of us. During a weekend visit he looked down at his healing stumps and mused, ‘this is all I’ve got left mate – I’ve got to make the best use of it’.

He did just that.

Fitted with a new arm complete with a shining chrome hook, and a mechanical leg, he settled into a new job with the Public Service. Soon after he met Judy, an attractive Vietnam war widow with two children, Justine and Dominic.  After a brief courtship they married and soon Danielle, Diedre and Judith joined the family roll.  He boasted that he didn’t lose everything in that fateful land-mine blast!

The bliss of family life was soon shattered when Judy was diagnosed with terminal cancer. She was just 31.  How could life be so cruel to one so beautiful?  He nursed her until the day she died.

Now a single dad with 5 children he learned that changing nappies was not easy for a bloke with only a reconstructed thumb and finger.  He joked that the babies got more pinpricks than the shrapnel pellets he got from the land-mine explosion!  Simple chores were major challenges but Jethro was a sapper – and sappers are trained to find ways around obstacles.  The role of the Royal Australian Engineers is to enhance the mobility of our troops and impede the mobility of the enemy.  It often requires a high degree of ‘sappernuity’.

Hanging nappies on the Hills Hoist was just one of the daily challenges he faced.  How we take things for granted!

Jethro was not alone in his struggle.  His army mates and Legacy kept a watchful eye on the family and were ever ready to help.  But as time went by he noticed some of them starting to fall apart.

A stunning woman caught his eye at a Legacy function.  He learned her name was Perle and she was an army widow with two young boys, Ian and Anthony.  They chatted and it was soon game over for Jethro.  They married soon after.

The plight of Vietnam Veterans was recognised amongst peers but ignored by government and the RSL at the time.  An association of Vietnam Veterans was established and Jethro left his job to become a full time advocate for his mates.  He joined Legacy to help other service widows and their children.  It was the least he could for them.

During our bicentennial year in 1988 he received the ‘RSL Achiever of the Year Award’ for his selfless service to veterans.

In 2006 he was made a member of the Order of Australia.

It has been a remarkable journey for the skinny 11 year old immigrant who arrived in Australia on 26 January 1956. Flags were not an issue in those days.  Australia had fought off the Japanese just eleven years before.  We knew who and what we were.

But forty years on Jethro’s war injuries are creeping up on him.  His left shoulder needed major surgery because of the years supporting his large frame on crutches.  His left arm, the only one he has, is now useless.  Excruciating lower back pain keeps him immobile for days on end.  Last year open heart surgery was required to replace a faulty mitral valve.

A later keyhole operation resulted in an infection that attacked his new valve.  A blood clot broke off and lodged in his spleen.  Repat surgeons decided there was no option but to replace the valve with a mechanical device – immediately!

As the sun rose on the 50th anniversary of Jethro’s arrival in his adopted country an emergency team scrubbed up for a marathon operation at Greenslopes Repatriation Hospital.  Jethro had just one request.  He wanted to see an Australian flag on the end of his bed when he woke up.

I was lucky to get a late flight to Brisbane on the eve of Australia Day.  I met Perle who had little sleep from the night before.  We expected a three hour operation.  Four hours went by – we pretended not to notice the time.  Five hours.  It was getting harder to maintain the pretence.  Perle picked up the phone in the intensive care waiting room.  He was OK.  The valve had ulcerated and it took them an additional couple of hours to work through the complications.

The call ended but Perle held the phone for a few seconds as the relief washed through her.  We were told he would take a few hours to come round.  Perle had time for a quiet rest at home.

I waited because I was the first bloke Jethro saw when he came out of the operating theatre in Vung Tau 40 years ago.  I thought it might be a good omen to be around when he woke up this time as we all feared the worst.

I will never forget the moment!  He reached out with his stump and I grabbed it – his eyes expressed an urgency I had never seen before.  We stayed gripped together for the next hour while he dozed in and out of consciousness.  As he came to he began to grin and squeeze my hand between his stump and his side.

He was in good care.  A charming, attractive nurse maintained an attentive vigil at the end of his bed.  A young doctor hovered around.  High tech instruments monitored every bodily function – a far cry from the pressurized ward in that army field hospital 40 years ago!

This time he opened his eyes a little further and his face lit up – he sighted the Australian flag on the end of his bed!

Australia Day has different meanings for different people.  For Jethro’s family –his wife Perle, their seven children and 12 grandchildren, and to all the mates who know of his plight,  it is the celebration of the survival of a young immigrant digger who has given his all for his adopted country.

Jethro’s spirit is an inspiration to us all.  His laconic wit has never left him.  Before Christmas he wanted to go to a show in the city.  His mate, Peter Ferguson, called him to say the prices were outrageous – it would cost an arm and a leg.  ‘I’ll send Perle then’, Jethro said, ‘I can’t afford to go’.

On arrival back in Sydney I received a note from Annie Philiben:

‘I was the nurse on duty when he arrived on the post op ward. I never forgot that fighter.   One of the things you probably didn’t know was that after 7 or so surgeries to clean his amputations (shorten the limbs) he was doing real well. Then he became extremely ill and for days we had no idea what the problem was.  Finally they took him to surgery and found he had an infected gall bladder.  The surgeons just wanted to drain the gall bladder but a false move caused the gall bladder to rupture and all that infected goo went over his belly. This is really a bad thing to happen. We were very worried about him. He had such high fevers and was so out of it.  One day a nurse noted that my uniform was full of holes.  It was from the silver nitrate solution we used on burns, it used to splash back on us and made holes in our uniforms.  She said “Annie what happened to your uniform.”  I told her about the silver nitrate and said “one of these days the whole uniform is just going to fall off.”  John lifted his head and said “I sure hope I’m there that day.”  He was better.  It was hard not to cry’.

It still is Annie!

Safety Upgrade of the Kokoda Trail

HERITAGE INTERPRETATION OF THE KOKODA TRAIL