Negotiating the current plethora of Kokoda trek operator websites can be as challenging as trekking the trail itself.  Prior to 2003 there were only a handful of trek operators on the trail.  These companies specialised in the military history of the Kokoda campaign and had developed a good relationship with the local villagers by providing them with alternative source of income and support for local projects.

Since 2004 there has been an explosion in the number of operators claiming to be expert wartime historians, explorers, adventurers, anthropologists, etc.  Among them is the usual band of tricksters and carpetbaggers attempting cash-in on the market.

They do this by hijacking original material to create a perception that they are ‘genuine’.  They claim to be ‘passionate’ about our diggers, ‘expert’ in the history of the Kokoda campaign and ‘sympathetic’ to villagers. They claim to stay in the ‘village huts’, eat ‘village food’ and follow the original wartime trail for an ‘all-inclusive’ cost.

Prospective trekkers should therefore be warned that if it sounds too good to be true – it usually is.

Some of the common tricks and cost-saving measures used to attract unwary trekkers are:

1. Claims to trek across the original wartime trail

The original Kokoda Trail was a mail route between McDonald’s Corner and Kokoda.  This was the route used by the 39th Battalion when they first trekked across it.  As the campaign developed other tracks were cut to facilitate the flow of supplies such as the route to Lake Myola.  Since the war other tracks have been cut to make the trek shorter and easier for villagers.

The original wartime trail was mapped by the Australian Army and published in a 1:100 000 map series of the Owen Stanley Ranges.  The recent introduction of GPS technology has allowed for the original wartime routes to be navigated.  These have been published in a recent 1:50 000 topographical maps which identifies the original Kokoda Trail mail route and the shortcuts now used to connect villages which have been relocated since the war.

There are a couple of ways to checking a trek operator’s claim to follow the ‘original wartime trail’.

The second is to obtain the Kokoda 1:50 000 topographical map which displays the original wartime trail and today’s eco tracks –

A third is to ask for a money-back guarantee if you discover you have been duped – you will never get it back of course but it might make you feel better!

This is a clever cost-saving trick because it saves the operator from having to provide mosquito-proof tents. What they don’t explain is that this will increase the risk of malaria because there are no mosquito nets in village huts.  A malarial mosquito that sucks on a PNG guide sleeping in the next hut then hops across and has your blood will infect you in the process.  Another minus is the lack of privacy as there are no screens or separate rooms – so if you want your own space to have a scratch this is not the place to be.

Whoa!  Having to share a tent with somebody you have never met for 8 – 10 days is a huge no-no.  Your tent is your haven after a hard day’s trekking.  It’s a place to lay out your gear for the next day, write a few lines in your diary, hang up your wet socks and jocks and bed yourself down – it’s not a place to share farts with a stranger! Be on the lookout for this one.

This is another clever cost-saving trick because it means the operator does not have to spend as much on food or engage as many local porters to carry it.  The main problem with village food is the lack of hygiene standards in the preparation of the meals.  The fact that the highest number of emergency evacuations for trekkers is the result of severe gastro problems (vomiting/diarrhoea) indicates that trekkers should be wary of operators who cut costs by relying on village food.

Another trick is to create the impression that ‘accommodation’ in Port Moresby includes all meals.  Yet another sneaky one is to provide only one-night’s accommodation.  This means you will transit straight on or off the trek.  This does not allow any flexibility for the myriad of things that can go wrong.  A lost bag on the way in can mean a very uncomfortable first night on the trail, or a missed international flight on the way out.  These two tricks need to be carefully checked because you’re in PNG – ‘the land of the unexpected’.

A popular trick is to create the impression that their trek leaders are military ‘historians’, are ‘passionate’ about Kokoda, are ‘professional’, etc, etc.

Professional battlefield presentations require an understanding of the Principles of War, military strategy, the phases of war, the principles applicable to each phase and an intimate knowledge of each particular battle.  Explaining that ‘a big battle happened here’ and then reading out the names of those who were killed, wounded or missing from a list obtained from the Australian War Memorial is not a battlefield presentation.

Leaders who trek once or twice a year and have no previous army experience should not be regarded as ‘professional’ in this regard.

One of the least visible but most shameless forms of cost cutting is to not provide sleeping bags, sleeping mats, trek uniforms, or proper food for PNG guides and carriers.  The only way you can check this is to walk around your campsite at night and see if they are wrapped up in sleeping bags on foam mats. Another way is to ask chat with them during their trek and ask them if they have enough to eat.  They will tell you if they’re hungry. If they are cold and hungry you are trekking with a carpetbagger.  It’s a bit late to do anything about it by then but you can tell your friends about them when you get home.

If your trek operator has organised a charter aircraft to deliver supplies to Efogi village, which is half-way across the trail, you should have a ratio of two PNG guides/carriers for each trekker.  If they haven’t organised a charter you the ratio needs to be 4:1.  If it is less than this they will be carrying backpacks up to double the recommended weight i.e. up to 40 kg. Ask your chosen trek operator what ratio of guides/carriers to trekkers he uses – then count them when you arrive to start your trek.  It will help you trek with a clear conscience.

All trek operators claim to have qualified, experienced, professional, passionate and culturally aware trek leaders.  The reality is different.  One company offers free treks to anybody who has trekked with them and wants to do it again – all they have to do is lead their next group.  Another engages leaders that only do one trek a year.  And another has a bloke who motivates his trekkers with group hug and a cringe-inducing ‘Aussie, Aussie, Aussie, Oi, Oi, Oi’ chant each morning. It is important to check the leadership credentials of your designated trek leader –  you would only follow some out of curiosity!

Trekking companies who respect the Battle Honours awarded to the 10 Australian battalions and the Papuan Infantry Battalion who fought in the Kokoda campaign refer to it by the name emblazoned on each of their regimental flags i.e. ‘Kokoda Trail’. They also respect the sovereign right of Papua New Guinea to name their own geographical features – and the official name on their statute books is ‘Kokoda Trail’.

Kokoda Track has emerged as the politically correct name in Australia over the past decade and has been adopted by those who do not understand the significance of a Battle Honour or sovereign rights.

The Latin proverb of Caveat Emptor (let the buyer beware) therefore applies. There are a small number of professional trek operators who specialise in the wartime history of the Kokoda campaign; a larger number of eco-operators who pretend to; and a gaggle of opportunists who will use every trick in the book to get your deposit. 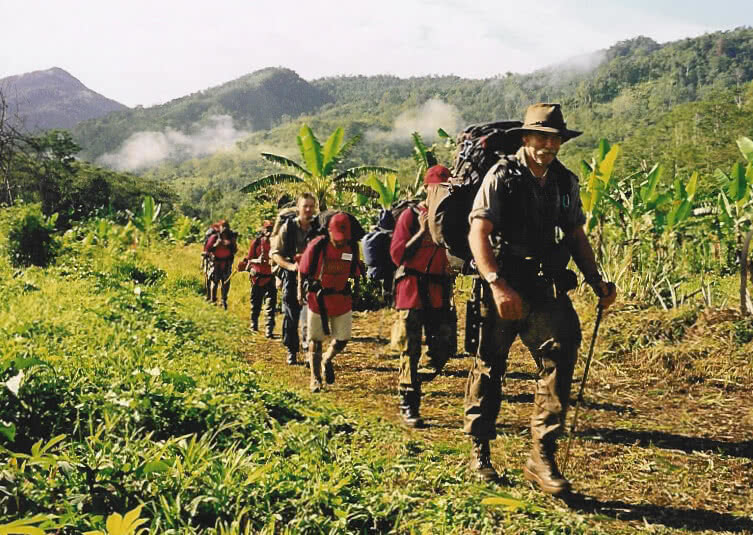 TREKKING: All you need to know!