Wartime journalists wrote that our diggers often feared the jungle of Papua and New Guinea more than they feared the enemy.  It was a hell of place to die.There were times when the badly wounded were given morphine and a gun and left to the mercy of the enemy to cover their mates escape. ‘Goodbye cobber, may God Bless You’ was whispered as a farewell salute.

Others had to be left where they fell. When time and circumstances permitted they were given a burial service and the site was recorded on crude sketch maps for recovery at a later time. Many were never to be found.

‘I have seen the time when you dig a number of holes in the ground and bury your dead’ wrote Laurie Howson of the 39th Battalion.  ‘Nothing would be said, but you think ‘maybe it will be my turn next.’

Seventy years on our veterans of the war in Papua and New Guinea are at rest in three beautifully manicured cemeteries in Port Moresby (Bomana), Rabaul (Bita Paka) and Lae.

The architectural design of these sacred places has its origin in the principle of commemoration in perpetuity which was adopted by the Imperial War Graves Commission in 1917. The core ideology was that there should be no distinction between officers and men. All Commonwealth war cemeteries were to be based on principles of equality and uniformity. There is no distinction in style of commemoration of headstones, plaques or memorials made on the basis of military rank, civil rank or wealth of the veteran or his family.

A Cross of Sacrifice is a feature in war cemeteries with 50 or more burials.  It is a tall, carefully proportioned, sandstone Latin cross usually standing on an octagonal base with a downward pointing bronze sword attached to its face.  Together the sword and cross embody the military and spiritual nature of the cemetery.  The Cross was intended to represent the faith of the majority of the dead it overlooked.

A Stone of Remembrance denotes a war cemetery with over 1,000 burials. It is featured to capture one of the key purposes of commemoration – to forever remember our war dead. A Stone of Remembrance is a simply-edged slab suggestive of a sarcophagus, set at the top of three steps.  Non-denominational and universal in its design, it is a monument to represent those of all faiths and of none.  Its design was based on complex geometry from the Parthenon.  All Stones of Remembrance are 3.5 metres long and 1.5 metres high. ‘Their name liveth forevermore’ was chosen by Rudyard Kipling from the Book of Ecclesiasticus in the Bible.

White marble headstones and bronze plaques are set in orderly rows within war cemeteries and designed to be uniform and permanent.

A Memorial to the Missing was first inspired by the words of Field Marshall Lord Plummer at the unveiling of the Menin Gate Memorial in 1927. ‘He is not missing. He is here.’

The Port Moresby (Bomana) War Cemetery lies in a serene tropical garden 19 kilometres north of Port Moresby off Pilgrims’ Way. The cemetery was begun by the army in 1942 and formally dedicated by the Governor-General of Australia, Field Marshall Sir William Slim, on 19 October 1953. Those who died fighting in Papua and Bougainville are buried here.

On a rise at the rear of the cemetery is the Port Moresby Memorial to the Missing which consists of a rotunda of cylindrical pillars enclosing a circle of square pillars with bronze panels engraved with the names of 703 Australians as well as Papua and New Guinea local forces listed as missing-in-action. The names of the battlefields on which the men died are carved on the entablature above the pillars. In the centre is a topograph with a bronze compass showing the direction and distance of the battlefields.

Bita Paka War Cemetery is near the site of the German wireless station captured by the Australian Naval and Military Expeditionary Force on 11 September 1914 during the first Australian action of World War 1 to seize New Britain.  Five Naval personnel who died in the operation at Rabaul are buried here.  A sandstone memorial in the lawn approach to the cemetery bears testimony to this event.

The cemetery was established by the Army Graves Service in 1945 and taken over by the Commonwealth War Graves Commission in October 1947. It is the smallest of the three war cemeteries in Papua New Guinea and contains the graves of 1,114 servicemen who lost their lives in New Britain and New Ireland, or who died in the area while prisoners of war.

A large number of Indian prisoners of war from Malaya and Hong Kong were liberated from the Japanese by the Australian Army during the 1945 campaign in New Britain, New Ireland and Bougainville. A total of 619 casualties of the old Indian Army are buried at Bita Paka.

An avenue of bronze panelled stone pylons leading from the entrance building of the cemetery to the Cross of Sacrifice forms the Rabaul Memorial to the Missing with 1,224 names of those who died in New Britain and New Ireland, and who have no known graves.  This includes 1,216 Australians. A central stone lectern at the commencement of the avenue carries a bronze plate with the following dedicatory inscription:

In this place are recorded the names of officers and men of the British Commonwealth of Nations who died during the 1939-1945 war in the New Britain Area, on land, at sea and in the air, but to whom the fortunes of war denied the known and honoured burial given to the comrades in death.’

Bita Paka War Cemetery also contains First World War graves brought in from Rabaul Cemetery in 1950 and from Kokopo Old German Cemetery in 1961. Special memorials commemorate three casualties who were buried in Rabaul Old Civil Cemetery, but whose graves could not be traced following damage to the cemetery during the Japanese occupation. In all, 32 First World War servicemen are now buried or commemorated in the cemetery.

Lae is a town and port at the mouth of the Markham River on the Huon Gulf.

Lae War Cemetery is located within the township adjacent to the Botanical Gardens. It was commenced in 1944 by the Australian Army Graves Service and handed over to the Commonwealth War Graves Commission in 1947.

The cemetery has an impressive entrance of stone pillars joined by stone lattice work.  Within the entrance is a grassed forecourt with rain trees and a surround of colourful shrubs.  Rising from the forecourt is a wide flight of steps leading to a flat-topped colonnade.  The central span of the colonnade frames a view of the Cross of Sacrifice, which stands on a wide expanse of lawn studded with the bronze plaques that mark the gravesites.

The war cemetery contains 2,818 graves including those of 426 Indian soldiers who were taken prisoner in Malaya and Hong Kong and who were brought to New Guinea by the Japanese. It also includes two men soldiers from the United Kingdom – one who was attached to 2/9th Australian Infantry Battalion and the other who was a member of the Hong Kong-Singapore Royal Artillery.

The Lae Memorial to the Missing is situated in the centre of the cemetery and contains the names of 348 men listed as missing-in-action.

Over two thousand years ago Pericles wrote of his fallen Greek soldiers:

‘Each has won a glorious grave – not that sepulchre of earth wherein they lie, but the living tomb of everlasting remembrance wherein their glory is enshrined. For the whole earth is the sepulchre of heroes. Monuments may rise and tablets be set up to them in their own land, but on far-off shores there is an abiding memorial that no pen or chisel has traced; it is graven not on stone or brass, but on the living hearts of humanity.

‘Take these men for your example. Like them, remember that prosperity can be only for the free, that freedom is the sure possession of those alone who have the courage to defend it.’

He could well have been writing of our diggers in the Papua and New Guinea campaigns. 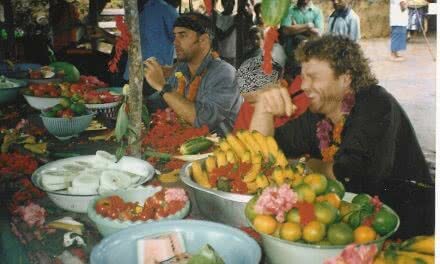