We are gathered here today to commemorate the raising of the Australian Flag at Kokoda Village on 3rd  November 1942, 69 years ago today by Major General George Vasey, the Commander of the Australian 7th Division.  This event symbolised the turning of the tide in the war against Japan and was warmly acclaimed by both the Australian soldiers present and the group of PNG carriers and Kokoda villagers in attendance.

Japanese plans for a seaborne invasion of Port Moresby had been thwarted bu Australian and American naval forces in the Battle of the Coral Sea in early May 1942 and the battle of Midway in early June 1942.  This left them with the only option of a land assault over the Owen Stanley Ranges via the Kokoda Trail.  Their infantry forces started landing on the beach at Gona on 21st July 1942.

Their preparations and subsequent plans were continually disrupted by the heroic actions of our fighter and bomber pilots who continually bombed Rabaul and the Japanese landing fleets on the Northern beaches at Buna and Gona.

The fighting withdrawal continued with another major battle at Brigade Hill and many lesser contacts at well planned delaying positions.  But with the combination of greater troop numbers and sifnificant fire superiority with their portable mountain guns the Japanese had the Australians on the backfoot all the way to Imita Ridge, just 40 kilometres from Port Moresby.  However by mid-September 1942 things were changing.  Fresh Australian troops had joined the battle and the Australians had artillery support for the first time on the Kokoda Trail.

The Japanese forces on Ioribaiwa Ridge facing Imita, could see the sea to the south and knew they were close to Port Moresby, but they had taken very heavy casualties in the fighting so far, were short of rations and ammunition, and things were going badly for their forces at Guadacanal.  Their commander, General Hori, received orders to abandon their attempts to take Port Moresby and to advance to the rear.  The Japanese army had no words for retreat or withdrawal.  This was the high tide of the Japanese advance towards Australia but it was a near run thing.

The Australian advance north commenced on the 27th September and after a major 7 day battle at Eora Creek they entered Kokoda on the 2nd November and the Divisional Commender raised the Australian flag on the 3rd November.  The battle for Kokoda had been won, but at a very considerable cost and there was still much fighting to come.

It was very significant that there were PNG carriers at that original flag raising and that we have a good PNG contingent with us here today as our victory would not have been possible without the support and sacrifice of the wonderful New Guinea Wartime Carriers – the legendary ‘fuzzy-wuzzy angels’ who carried important stores forward and our casualties to the rear.  We will honour their valuable contribution a little later in the ceremony.

I would like to finish by quoting some words from our Chairman, Rusty Priest.  ‘It has been said that Gallipoli created a nation but Kokoda saved a nation.  Other have reminded us that at Gallipoli we fought for Britain and lost – at Kokoda we fought for Australian and won.

The Board of the Kokoda Track Memorial Walkway believes it is appropriate that today, 69 years on, we recognise the symbolic significance of the raising of the Australian flag on the Kokoda plateau on 3rd November 1942 and we pause to reflect on those four words etched into the four granite pillars at Isurava that recognise the contribution of our brave soldiers, words that as a former professional soldier I find inspirational – Courage, Endurance, Mateship, Respect. 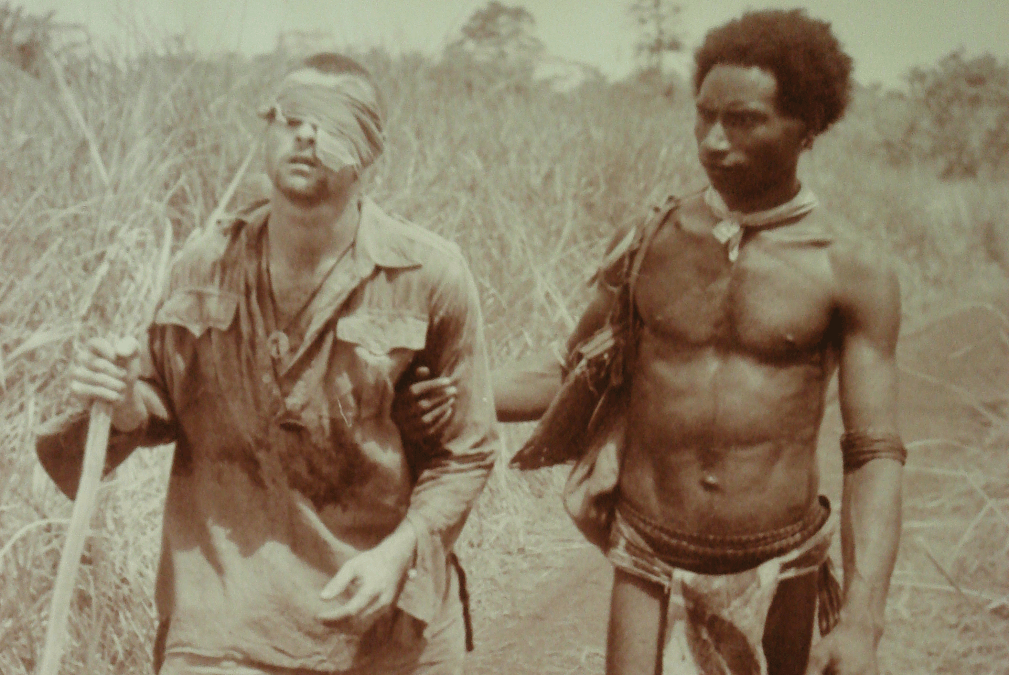