Kokoda Day will be commemorated at a special ceremony at the Kokoda Track Memorial Walkway, Rhodes Park, Concord, at 10.30 AM on 3rd of November 2011.

The commemoration will include a re-enactment of the flag raising ceremony which took place on the Kokoda plateau on the 3rd November 1942.  Kokoda Day symbolises the turning of the tide in the war against Japan.

Japanese plans for a seaborne invasion of Port Moresby were thwarted by Australian and American naval forces in the battle of the Coral Sea (4 – 8 May 1942) and the battle of Midway (4 – 6 June 1942).  This left them with the only option of a land assault over the Owen Stanley Ranges via the Kokoda Trail.

Japanese preparations and subsequent plans were continually disrupted by the heroic actions of our fighter pilots who continually bombed Rabaul and the Japanese landing fleets on the northern beaches at Buna and Gona.

The Kokoda campaign began with the first contact between the 39th Militia Battalion and the advancing Japanese South Seas Detachment at Awala (forward of Kokoda) on 24 July 1942.  The first battle of Kokoda was fought on 27 July when the Australians were forced back into the Jungle.  After a bitter and desperate campaign over the ensuring three months the Australians turned defeat into victory and recaptured Kokoda on 2nd November 1942. The Australian flag was raised at a parade held on the following day.

Our victory would not have been possible without the support and sacrifice of the New Guinea wartime carriers – the legendary ‘fuzzy-wuzzy angels’.

Their service will be commemorated with the unveiling a bronze statue of the famous photograph of a fuzzy-wuzzy angel escorting a wounded Australian digger to safety by the Minister for Veterans Affairs, The Hon Victor Dominello MP, the Mayor of Canada Bay, Mr Angelo Tsirekas and the Chairman of the Kokoda Track Memorial Walkway,  Mr Rusty Priest.

Three descendents of the ‘fuzzy-wuzzy angels’ led by local village chief, Benjamin Ijumi, are flying in from PNG for the unveiling of the statue.

We currently have one day proclaimed to remember our sacrifice in World War 11 – VP Day on 15 August which commemorates the allied victory over Japan.

It is therefore timely for us to recognize the symbolic significance of the raising of the Australian flag on the Kokoda plateau on 3 November 1942 to allow them to reflect on those four words etched into the four granite pillars at Isurava: Courage – Sacrifice – Mateship – Endurance’. 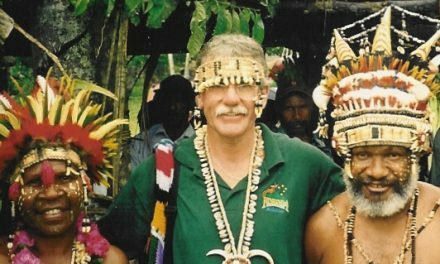