The news that the interim Executive Officer of the PNG Kokoda Track Authority, Annette Dean, quit her job and returned home to Tasmania is no surprise. She cited death threats, corruption and daily demands for money as the normal challenges she faced in her job. She needed a security escort to get from the carpark to her office in Boroko each day.

Annette’s credentials for the job were never in question but whoever made the decision that a white woman could work effectively in the KTA office environment in Boroko was naive in the extreme. They certainly did not listen to her predecessor, Warren Bartlett.

Warren, who has been in PNG for more than 40 years, ran the KTA office since the organisation was established in 2004. He faced two major challenges on a daily basis. One was running the entire trekking operation across Kokoda without any effective staff support. The other was dealing with an unqualified Board who used subtle and not so subtle methods of intimidation to get access to substantial amounts of money from treks fees and elaborate scams with their wan-toks in local, Provincial and National government.

Neither the Australian nor PNG governments were intereted in the management of the Kokoda Trail at that time. He was on his own.
Adverse public reaction to a proposal to mine part of the track caused them to focus on a solution to protect the military heritage of the area.  By this time the Board had effectively misappropriated more that a million kina in Port Moresby and embezzled more than a quarter of a million more from the bank.  Nothing was flowing through to the villages who were forced to compete amongst themselves for trekkers business along the track.  It pitched brother against brother.  Clan against clan.  Village against village.  Koiari against Orokaiva.
Within a short period of time committees, consultants and conferences became the order of the day as Canberra began the task of ‘assisting’ PNG to obtain a World Heritage listing for the Kokoda Trail and the Brown River Catchment Area.  Most observers thought this was a bit ambitious in al country with a system of customary land ownership.

Working from the top down – as they do in Canberra – departmental bureaucrats visited villages along the track by helicopters to famiarise themselves with ‘village needs’.  They ignored advice from trek operators who have been operating along the track for up to 20 years.  They ignored previous research from village and stakeholder workshops and refused to continue that process.  They refused to engage people with extensive experience in Melanesian culture and language.  They refused to trek with established companies who focus on the military history of the Kokoda campaign in order to understand the significance of the pilgrimage.

It was soon apparent that Canberra was operating in a parallel universe.  Trek operators were left to make their own arrangements as they conducted academic conferences in Canberra, took advice from armchair experts who once had a ‘kokoda experience’, and continued to rotate people with no experience in Melanesian culture through the country.

After 15 months of frenetic activity not a single management measure has been implemented for the track.  It could be argued that the system has regressed.  The office is no longer accessible on a 24 hour basis and the link between villagers and management seems to have been broken.

Annette Dean’s departure is a wake up call.  Australia needs to draw a line in the sand and admit they have got it badly wrong over the past 15 months.  They need to immediately cancel any plans for ‘experts’ scheduled to conduct track analysis and assess village needs.  They need to engage people familiar with Melanesian language and culture.  They need to identify clans and landowners along the track.  They need to acknowledge that Kokoda is a military historical pilgrimage and not an exclusion zone for eco-evangelists. They need to work in partnership with trek leaders, clan leaders, landowners and Local/Provincial  government officials.

They also need to acknowldege that Australia’s politically correct culture is not appropriate for Papau New Guinea.

Let’s hope that Annette Dean’s negative experience can be used in a positive way. 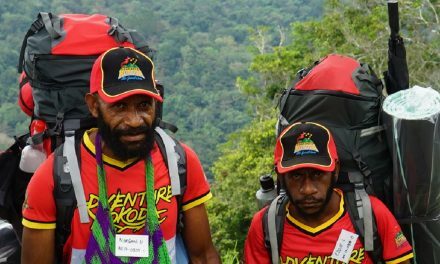